Olivier Marc Thomas Leger was born in Ontario,Canada. His family moved to the UK in the early nineties, making a home in Herrick Road in Loughborough for a while, when he was about eleven months old. When I saw Oli he had just returned from The Other Art Fair April 2014 in London, where his work had been very well received.

“It was a great event, good for commissions and sales, and I’m now really interested in doing shows in different places, Manchester, Liverpool, Yorkshire as well as different countries, including Canada. Vancouver in particular appeals, the mix of mountains and sea.“ 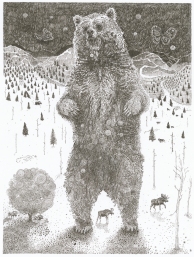 “I went to university in Norwich. I didn’t always want to be an artist. I would have been happy to do anything. Originally I wanted to go to a ski resort and be a snowboard teacher, then when I was eighteen I did an Art Foundation course in Loughborough. The tutors were engaging and inspirational.”

The work Oli makes now is very different to his student work. After completing his degree in 2011 Oli gradually started making drawings in his spare time. In 2013 he submitted some works, including Blue Whale for the Sock Open Exhibition and won first prize.

“I handed in my work just to see what I could do. I won, and now people are buying my work so I’m enjoying life at the moment. I love the environment and animals; I like to turn animals into planets that have their own ecosystems. They are landmasses. I play with scale – the trees on the backs of the animals started with the Rhino Beetle. How big is the beetle massive or tiny? I like to toy with the imagination and produce playful happy work. But I am also thinking about conservation, sustainability and the environment. I am concerned about the self-destructive nature of the human race and diminishing resources, it is a sad and tragic situation.” 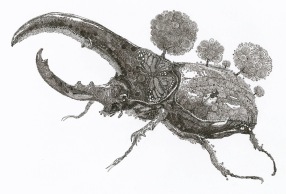 The works are endlessly fascinating, a testament to the amount of time Oli puts into them. One of the larger works ‘Tortue Geniale’ took over seven months to complete and a lot of pen nibs.

“I got through about sixty nibs on the sea turtle drawing. I have an idea of the composition but much of it appears as I go along. I like using the negative space, and going into the detail. I like to create drawings of such intense detail that they give the impression of infinite discovery. The turtle has probably taken about two hundred and fifty hours to complete over seven months. I usually work on a few pieces at the same time.” 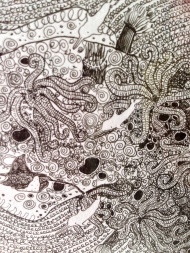 Oli has just started work on a commission, another ocean based work. The commission is flexible and open, not too directive which he is enjoying Oli explained how he had an uncle that tracked Whales on an icebreaker called the Whale Song, following Humpback and Beluga Whales. The boat is already making an appearance in the piece.

You can view and purchase work by Oli and other artists at the NGS Open Garden & Secret Craft Fair in Loughborough, Leicestershire on the 13th & 14th of June. 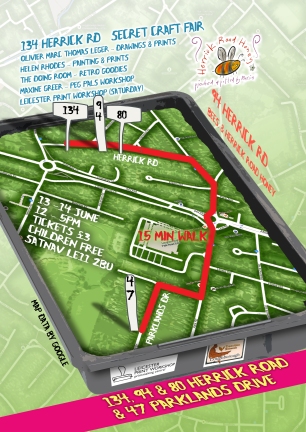